Fight to maintain God’s covenant of marriage.
Intercede for the Supreme Court as they hears arguments
in support of The Defense of Marriage Act & Prop 8.

Join us Tuesday, March 26th, 11:00 AM EST just as opening arguments are being heard. 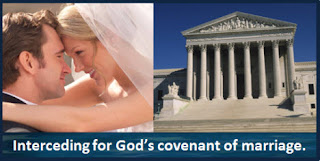 Fifteen states will urge the Supreme Court to strike down the Defense of Marriage Act, arguing that the law preventing the federal government from recognizing gay marriage is unconstitutional.

Separately, 13 states will file a brief on Thursday arguing that Proposition 8, the California homosexual marriage ban that is currently before the Supreme Court, is unconstitutional. That brief will be filed by Massachusetts and joined by 12 other states and the District of Columbia.

“Our experience in Massachusetts has unequivocally shown that ending the exclusion of same-sex homosexual couples from marriage has only strengthened the institution,” Coakley said in a statement about her amicus brief in the Prop. 8 case. “We urge the Court to strike Proposition 8 down because it discriminates against gay and lesbian individuals and their families.” 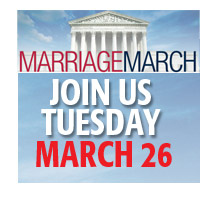 The amicus brief in the case challenging DOMA, United States v. Windsor, argues that DOMA violates same-sex couples’ right to equal protection under the law. It states that DOMA represents an unprecedented intrusion on the authority of the states.

“There is no federal interest adequate to justify DOMA’s categorical disregard of the choice of some States to recognize or authorize same-sex marriage,” the brief states, adding that DOMA’s “sweeping refusal to recognize for federal purposes a class of marriages valid under state law violates the equal protection component of the Fifth Amendment.”

“The federal Defense of Marriage Act clearly violates the principle of equal justice under law as enshrined in the U.S. Constitution, and improperly intrudes on the traditional role of states in regulating marriage and promoting equality. We urge the Supreme Court to overturn this discriminatory law,” Schneiderman said in a statement provided to The Huffington Post.

“The State of New York has long recognized out-of-state same-sex marriages, and the enactment of the Marriage Equality Act further cemented our State’s position on this critical civil rights issue,” he said. “My office will fight every day to defend the fundamental guarantee of equal protection under law for all New Yorkers.” (Contributor: Ryan Reilly for The Huffington Post)

Pray that God’s Word will be honored in the Supreme Court.

“Marriage should be honored by all, and the marriage bed kept pure, for God will judge the adulterer and all the sexually immoral.” (Hebrews 13:4)

“And said, For this cause shall a man leave father and mother, and shall cleave to his wife: and they twain shall be one flesh?” (Matthew 19:5)

We are in the midst of a fierce battle for marriage. The Supreme Court will be hearing testimony next week, on March 26 and 27, concerning whether the Federal Defense of Marriage Act (DOMA) and Proposition 8 in California (overturning homosexual marriage) should stand. The Court will render a decision probably in late June. There is MUCH political pressure on the Court to capitulate on these and cave in to the homosexual agenda. Even the president is pushing this.

Men and women, this is our generation’s Roe v. Wade fight! We must make a stand upon our knees for marriage.

From 7:00 PM, Monday March 25 thru 9 PM, Wednesday, March 27 intercessors around the nation from countless ministries will intercede as arguments are being heard at our Supreme Court.

Be encouraged by a word from a key leader in this initiative:

Since we have been obedient to pursue this course of action, to build a FIREWALL OF PRAYER around the Supreme Court during those two key hearings next week (DOMA/Proposition 8), the Lord has shown me a “new thing” that is on His heart! He has shown me that, while in days past, many of us have labored faithfully and fervently, fasting and praying and offering deep travail over issues that will impact us all, we were actually fighting inside our own fox holes!

On national issues like the Election last November, and the Supreme Court hearings on “Obamacare” last spring, we each marshaled our own forces, pouring our hearts out to the Lord for help. We all know the rest of the story . . . could our Lord be ready to reveal a new strategy for a new season, and could the battleground at the Supreme Court be the launching pad to release this hidden work across the nation?

We now realize that, as ministry teams, we can no longer afford to fight these national battles “alone,” but that, instead, the LORD is requiring us to come up on the wall together, in perfect alignment and in perfect unity, as we face the forces that would seek to undermine our people and our nation. As we stand TOGETHER, we form a “seamless garment” before Him, and the enemy will find no breaches in the wall through which to attack!

We are now aligned in:

We praise our God for the revelation of this winning strategy, as we work together to find our own place on the wall, and to defer to the others in their own positions, even honoring others as better than ourselves.

To GOD be the GLORY, for He is teaching all of us how to walk (or march) in this season, in His way!
Posted by Valley Harvest at 8:47 AM